Building on my previous smoking experience I decided my next step would be a little chicken. Eventually I'll move on to ribs, boston butt, etc., but I figured chicken would be pretty simple and I know how chicken should taste.

And that's pretty much where that story ends and the depressing one starts. The smoker caught on fire. Luckily I had my fire extinguisher on hand so it didn't turn into anything. Here's what I've learned. 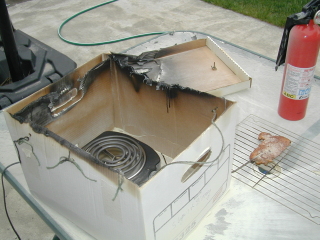 Shortly after posting about the salmon I intended to smoke, I was whisked away to Cheyenne, Wyoming on business. I barely had enough time and foresight to toss the fish into the freezer. I was a little worried about refreezing it, but the other option was to chuck it in the trash so I figured I'd be at least no worse off. And luckily it was only slightly freezer burned. I just thawed it for 2 days in the fridge with a big weight (stone bread pan) to squish some more juice out.

Today I jury-rigged up a smoker out of a cardboard box and the pieces of the terra cotta smoker that I'm still trying to build. My wife was a bit worried about having a hot object in a cardboard conveyance, so I made sure to have the fire extinquisher around just in case. Not a bad idea anyway, I suppose. Thankfully, no fire. 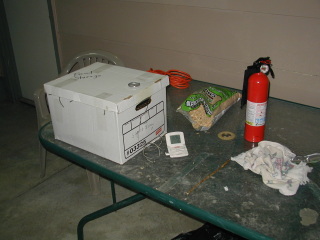 Following AB's recipe I cooked it until it hit 150 degrees F. Well, to tell the truth it was getting late and I was getting impatience, so I cut it off at 143. Please don't call the food police. The fish had been sitting in there for over 5 hours, so I'm quite sure any nasties had been eradicated.

The texture was a lot like canned tuna, but the flavor was so much better. So much smokier, although curiously it seemed to oscillate between strong and mild. The outside layer had developed this especially tasty thick, somewhat cruchy skin. The BBQ ribs I had in Cheyenne last week had a similar layer and it was equally delicious then. I believe those ribs were also dry smoked so I'm quite looking forward to using that technique on a lot more munchables. I had a bit of my salmon on a sandwitch with some mayo and it was to die for. 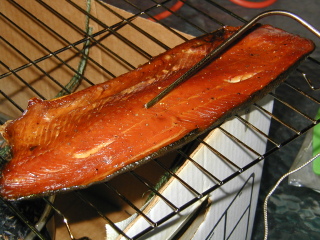 Not sure when I might next try the salmon. I have a feeling that wild salmon is a rare catch around here. I'm thinking that I may try smoking some trout if the streams are especially nice to me this year. I'll try out a number of different rubs and woods (I used apple, btw).

I was inspired to make pasta salad the other day, but unfortunately was out of town at the time, so I was delayed a few days. What a miserable time waiting it was, but I guess the results were worth it.

Basically I followed Joe's recipe. I used cheddar and colby jack cheese, deli sliced ham and turkey, and a plethora of veggies which seems to be where a pasta salad really sings its tune. We used mushrooms, cucumber, celery, carrots, and sun-dried tomatoes (which I made myself). I tossed it all together with a vinegarette of the tomato-infused olive oil and white wine vinegar, spiked with basil and mustard power. I also cracked some pepper over the top. So delicious. I served it with a slice of ham sauted in butter. 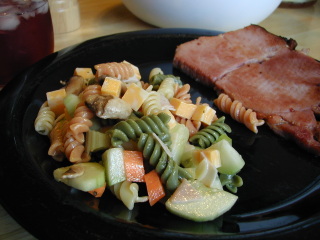 Last week at Walmart they had a big case full of frozen, wild salmon. Would you believe it wasn't even from China! Full fledged Alaskan salmon. Well, that farm raised, color added atlantic salmon just doesn't compare (or so I hear) so I couldn't pass up a 2lb fish for $5. Wasn't quite sure what to do with it, but I knew I wouldn't have another chance soon (and sure enough they were all gone the next time I visted).

We had half of it tonight baked with mustard, honey and butter. It was pretty good, I have to admit. I'm not really a fish guy so I found that a little surprising myself. My tastes sure have changed in the last 5 years. I think a good part of that is mental.

So what to do with the other half? Well, smoke it of course! I haven't finished my terra cotta smoker yet, so I figure I'll jury rig one of these bad boys. Since I only have half a fish, and it was a little smaller than AB's, I dropped the proportions by quite a bit. It's sitting in the fridge right now. I'll smoke it tomorrow evening and post about it, of course. 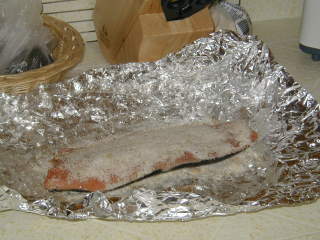 After reading Joseph Hall's lemon curd entry I decided to try it myself. The results were delicious. I didn't have a real lemon so I skipped on the zest, just tossed in enough lemon juice to taste yummy. I used 2 1/2 tablespoons of regular sugar instead of the superfine and it worked out just fine.

Comparing it to Alton Brown's recipe I see that AB uses proportionally less egg for the amount of butter. Mine didn't end up quite as thick as I hoped and I wonder if that was the reason. Everything else is pretty much the same. 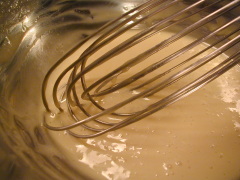 Last night I whipped up another batch of my jalapeno mayonnaise. Boy is that good stuff, and really easy to make. I didn't take pictures so you'll just have to make do with old fashioned instructions.

First, acquire some jalapenos. How many depends on how much mayo you want and how spicy you want it. I used 5 medium sized peppers and made a pint of mayo, which ended up being on the mild side. Roast those puppies until their skins are all black and charred. You can do that over a gas stove or under the broiler. A trick to getting the skins off is to set the peppers on a plate and cover with a lid right after removing them from the heat. Water will condensate and the skins will slip off pretty easily.

Rough chop the peppers into smallish bits and toss into a blending machine. I've used blenders, I've used food processors, and I've done it by hand. Take your pick. Puree the peppers with a few tablespoons of mayo, just enough to give the mixture some bulk. Less blending equals a thicker sauce so adjust as you like.

Mix in enough mayonnaise to dilute to the correct taste. Store in a glass jar in the fridge for a month or so, maybe more. I've never done tests but I've never had any go to waste either.

One thing I'd like to try in the future is using homemade mayonnaise. It also is pretty easy to make and using different oils leaves open endless possibilities. I'm thinking mainly of trying some chili oil. Spicy.

My local school district has decided to revamp its menu to reflect healthier choices. They're going to axe candy, caffiene, and junk food from the ala carte line as well as favor fresh food to processed food. This was an unexpected turn of events and I'm quite glad to see it. If I had known I would have attended the school board meeting and voiced my support, but since my kids still aren't old enough for school I don't pay much attention.

Another Alton Brown granola recipe for you. This one comes in bar form. How can you go wrong with anything in bar form? I've played with a number of variations on this one and have found it quite flexible as well as quite delicious. Loads better than most of the granola bars you can get at the store, although I'm still trying to get it a little more chewy.

On TWiT they mentioned that Revision 3 has posted a new cooking show, Ctrl + Alt + Chicken. I'm new to the whole Revision 3 thing, but I really like this show. I intend to watch further episodes.

This first espisode was chicken cordon bleu. The show was clever and very well done. The food, unfortunately, wasn't. They fried the chicken in oil that was way too hot so it was burned on the outside and raw in the middle. Sounds yummy, no?

Luckily the hosts were funny, had a witty rapport, and seemed to know how to host a show even if they couldn't cook. The production was excellent with high quality equipment, script writing, and editing. It was done with a geeky flair but would be fine for your average cooking enthusiast. They could really stand to watch the language a little, although now that I think about it the average prime time drama uses more foul language. Still, I found it only detracted from the show.

You know that feeling you get when you eat half a sandwich only to discover the bread is moldy? C'mon, fess up. We've all done that, and we know that sinking feeling you get in your gut. No amount of brushing your teeth really makes your mouth feel clean.

Well, that was the way I felt last week as I was listening to a podcast of KCRW's Good Food while driving to Wyoming. They were discussing a new trend in food packing where meat containers are filled with carbon monoxide to prevent the meat from turning brown. "That's horrible", I thought. Then they described the packages and that's when it hit me. That's exactly the meat I've been buying from Walmart. Well, I guess I should have expected it from them.