You may have heard that Twinkies will last forever. I decided to do my own research and see. Short answer: definitely not.

At the farmer's market on Saturday I came across a couple big bags of Hungarian wax and serrano peppers. It immediately occurred to me that I needed to make a chile sauce with them.

Tomorrow night I'll be giving a food demo on the subject of pie crust and why you should not be afraid of making them. Really you shouldn't. This world could always use a little more pie, don't you think? Here are the notes I prepared for the event, including two crust recipes and a bunch of tips that I've developed and researched. I hope all your pie making endeavors are successful! 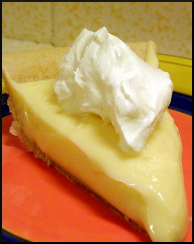 You might have been wondering where all the pies went. Don't fear as they are not gone for good. The memory card with all the pictures on it went on vacation to the coast (it took my wife and kids too), and with everybody gone I didn't feel up to eating an entire pie by myself. But now that they've returned, I'm back in full swing.

Just before they left I made this delicious pie. It was one of the pies listed on Shari's menu and it sounded intriguing, since sour cream isn't typically a dessert food. The recipe is fuzzy since it's been a while. Essentially what I made was a lemon curd with the addition of sour cream. I took the curd off the heat too soon and it didn't set up enough. Gun shy about curdling it I suppose.

The flavor was over-the-top lemony. Using fresh lemons helped there, I'm sure. It could have used a good bit more sugar though, as it was quite sour as well. The kids were not quite as thrilled by this one; the oldest even turned down a second piece. Just not in line with their sweet teeth, but I did enjoy it and my wife loved it. To each his own.

I'm still waiting for local berries to come into season so I dug into the non-seasonal list and pulled out an idea for an ice cream pie. I made a simple crust using crushed Oreos. I followed my normal recipe for crust, 1 1/2 cups of crumbs plus 1/4 cup of melted butter, but skipped the 1/4 cup sugar since the cookies took care of that nicely. The crust worked out well, having a nice flavor and a nice crunch but was not crumbly.

For the filling I made vanilla ice cream, from scratch of course. My sister had gotten me a vanilla bean many moons ago. It seemed to have some flavor left, but I added some vanilla extract just to be safe. The big debate was whether to use egg yolks or not. In the end I opted to leave them out as I thought the bright white would look better. I was satisfied with the results. 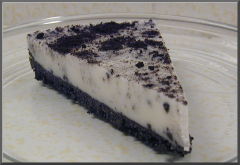 The flavor was great. My wife came back around with this pie, having been burned out by the overly chocolate pie last go around. I wanted to make some caramel to drizzle on the plate and on top, but I lazied out. It would have been a nice addition I'm sure. This pie will certainly make a repeat in the future, but I might opt for store ice cream just to save time. It would be fun to try some different flavors.

As a follow up to my previous post about Chocolate Fudge Overload Pie, I found out why chocolate seizes and why adding more water is a viable solution to recover. It's all about the emulsion of course. The short answer is that chocolate is a delicate balance between fat and water. When heated, it's easy to disrupt that balance with the addition of just a tiny bit of water and the sugar will crystallize. By adding more water the emulsion is reversed and balance is restored. 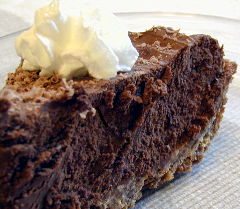 For this pie I took a journey down chocolate lane. First I opted for a crumb crust. You've undoubtedly had pie with a graham cracker crust before, and that's fine, but as a wonderful chef taught me, crumb crusts can be much more interesting. We happened to have some store-bought cookies on hand (my son came home with them from school inexplicably a few days ago). Chocolate chip cookies to be precise. I ground them in my food processor and mixed them with some melted butter. The butter melted the chocolate and it turned into somewhat gooey mess. I added some graham cracker crumbs to crunch it up and make up a little volume since I was a little short with just the cookies. Baked it for 10 minutes at 375° and left it to cool for a few hours.

For the filling I set my sights on a chocolate mousse. I melted 11 ounces of dark chocolate in a double boiler and let it cool a little. In the mean time I whipped 1.5 cups of heavy cream with a tablespoon of sugar to stiff peaks. Following the standard procedure, I added 1/3 of the cream and beat it into the chocolate. There was a brief instance where the chocolate wanted to seize. I've done that before and it ain't pretty. Luckily it was on the verge and I whipped it fiercely until the chocolate recovered. Following that near miss I folded in the remaining cream and then dished it into the shell. Quickly I whisked it into the fridge to set up over night (couple of hours would have been fine).

The texture of the pie was excellent. The shell was a nice balance of sweet, salty and crumbly. It was maybe a little hard to cut through with a fork, so probably a little more graham cracker and less chocolate chip next time. The flavor of the chocolate was great but oh so rich. My tummy is still churning from eating a full slice. My wife opted for just a sliver and now I think she was on the right track. There was just too much chocolate and not enough cream. I was worried that it would be too light, too airy but those fears were very much unfounded. Probably should have gone for the egg whites as well.

Luckily the kids have stomachs of steel and have promised to polish off the remainder for us. What a surprise!

A friend pointed me to an awesome contest that is going on right now to guess the origin of the next chocolate being developed by Amano Chocolate. I bought a couple of their bars way back and they were excellent. Unfortunately it's a little expensive for my sweet tooth so I haven't had a chance to try any of their others. If you like excellent chocolate, I recommend you mosey on over and give it a guess. 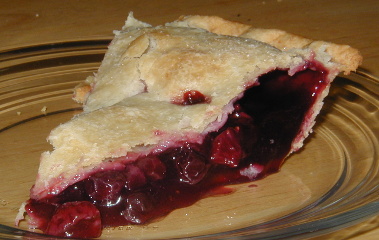 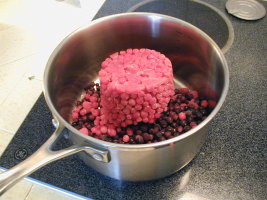 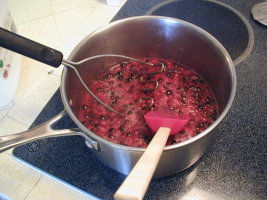 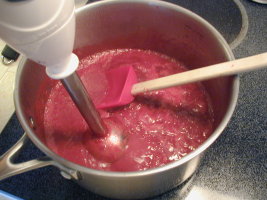 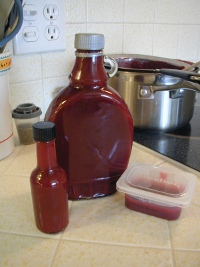