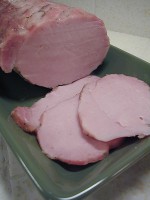 I've got an informal list of life goals, upon which are many food-related items. One of the highest ranked and longest lived is my goal to make bacon. Today I made significant progress toward that goal.

Scroll back a few weeks. I finally broke down and on a whim bought Michael Ruhlman's book, Charcuterie. Among the recipes is of course one for your normal pork belly bacon, and another for canadian bacon. The latter is much easier to accomplish because it uses a pork loin, easily found at any megamart, but pork belly on the other hand is a challenge. I've been keeping my eyes and ears open for it, and so far the best I've found is a place that can get me pork bellies by the case. Not wanting to commit to $80 worth of meat straight out of the gates, I opted for the canadian variety.

Next problem was acquiring some sodium nitrite, aka pink salt, which is a very crucial element of curing meat. Unless of course you're fond of botulism of course, in which case go ahead and skip this step. I'm not so I didn't. Technically I suppose since this bacon is cooked within a few days of curing and since the cure is relatively short, there's not much risk of botulism. Mostly in this case the nitrite gives you the pink color and a bit of flavor.

Either way the darn stuff is near impossible to come by. I found meat cures at the outdoor store but that was all premixed with seasonings. I found Morton's Tender Quick at both Fred Meyer and Albertson's. That's could do in a pinch because it's quite similar to Ruhlman's Basic Dry Cure, but I wanted better control over the ingredients (for example, in this recipe there's no sugar, so the Tender Quick would have been all wrong).

There's the Internet and supplies of pink salt are readily available, but the shipping was pretty steep everywhere I looked and I didn't want to spend a ton on my first try (see above re: pork bellies). The solution came when I went on vacation to Oregon and had a chance to stop by Market Supply in Portland. They had it right there on the shelf for a whopping $1 per pound. Bingo!

One important note about this process is that I expected the meat to take on its pink hue while it was in the brine. It came out slightly pink but mostly a lifeless gray. I was somewhat concerned, although having invested so much already there was no way I could give up. So I smoked it and the pink came right out. The color ended up a wonderful rosy shade which I really must say is much more appetizing.

From start to finish it was 3 days. Not bad really. The results speak for themselves. The texture is much like any ham you've tasted, which is why Pizza Hut gets away with using the same meat for "ham" and "canadian bacon" on their pizzas. The color is pretty much the same too, and since it's a loin lacks any significant fat or gristle. The flavor though is outrageous. The smoke is what first hits you. Then the salt, since I left mine in the brine about 10 hours longer than I was supposed to. But ignore that and focus on the flavor. The spices are mild but compliment the pork nicely. It's a wonderful combination and save my mistake on the salt, very balanced.

Next step is to build a BLT out of this. Ruhlman's been running a BLT Challenge this summer and I plan to compete. I've got all my other components ready so sometime soon expect an update with the results. I can't wait!

It was pretty salty.