Many moons ago, Stuart pointed me at a great little music jukebox named Rhythmbox. It worked OK, but I'm not really into Gnome. I wanted somemthing that fit in with KDE, used the same widgets and the same file selector. Basically I'm picky.

For quite a while I've been using Juk and for the most part it does what I need. Let me rephrase that. It works great and has all the features I need, except when it crashes. That I most certainly don't need. It didn't used to crash all the time. Rarely, if ever. Seems to be linked to when I review the history, but certainly not limited to that. The last crash was when I opened the tag editor. I got fed up. Now, I felt a little obligated to report a bug to the mailing list, but really I just don't care to put that much effort into it.

That's when I stumbled upon Amarok. It just happened to be the default media player in Kubuntu and I think I've found my new jukebox. Here are some of the fun things I've discovered so far. 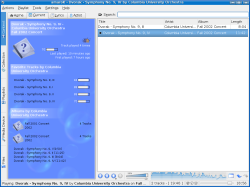 But, it's no panacea. The playlist can be a little hard to manage. When you create an automatic playlist, there's no easy way to browse it without disturbing the play queue. That's annoying. Even more annoying is that the interface will jump around at the beginning and end of songs. So if you're browsing your collection and a song ends, it flips you back over to the track information.

Still, it runs all the time and that's more than I can say about Juk. So far it's a keeper.